This article was first published by Technorati on 8 March 2010. To see all my Technorati articles, click Lifestyle in the Contents listing on the sidebar. 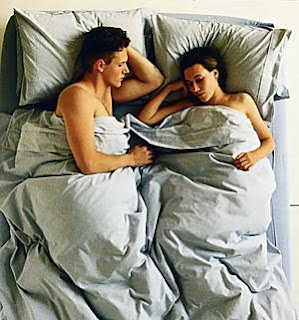 The National Sleep Foundation released its 2010 Sleep and Ethnicity Poll results today, uncovering unexpected findings that will forever stand in the way of some much beloved wives tales vis-a-vie sex and good sleep.

The poll, conducted by telephone with over a thousand participants, seems to be completely legit, with a nice PDF brochure of its "Summary of Findings," which contains lots of graphs and charts.

Word of warning: please consult that brochure yourself, because I stand behind none of these conclusions.

One of the stated goals of this research effort was: "To investigate attitudes and behaviors about the relationship between sleep and health across different ethnic groups." Last on the Foundations list, first on mine.

Another word of warning, sex plays a large role in the American bedtime routine.

According to the survey, it appears that African Americans have the deepest spiritual life, with 71% of respondents engaging in some kind of pre-bed prayer or religious ritual. Asians were last on the list at just 18%.

Blacks were also tied for first with Hispanics in the sex-before-bed category. Sadly, however, they tied at a low 10%.

Bucking conventional wisdom, Asians, though they placed last in the coital category at a meager 1%, were most likely to report having had a good night's sleep over all.

The Caucasian population doesn't manage to escape this sexual satire unscathed. Of the few polled who said they had sex before bed most nights (just 4%), the survey found that:

Apparently, sex among Caucasians leads not infrequently to turmoil, which happens to carry on into the wee hours.
Photo credit: The Sydney Morning Herald
at March 08, 2010