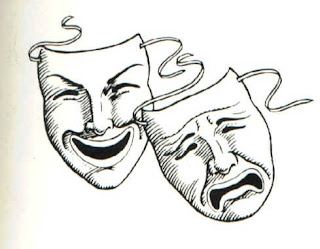 What a liberating feeling! I've learned to avoid dramatic people! I used to fall pray to their painful whimsy because I used to be dramatic myself. And this is really the key to getting past these people: recognizing and acknowledging your own drama.

Without a nice soft spot to sink their drama hook into, dramatic people have no hope of reeling you into their made-for-TV movies. Don't judge them and don't judge yourself, just recognize and acknowledge on both counts. And don't try to help them. The more you engage, the more you get sucked in.

The only way to help them is to avoid them altogether, leaving them to occupy a world of their own making, full of drama and other dramatic people. If this is not a formula for sufficient suffering that stands a chance of breaking them free of the self-inflicted burden they carry, I don't know what is. Perhaps by being forced to go ever deeper into their drama in this way they will emerge free on the other side of it.

And this is one of the many ways that we can understand that the Universe is truly a beneficent place. It will never give up on all of us drama queens.