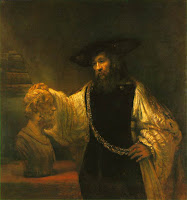 But this view of Kant's is a natural progression from the law of causality (cause and effect), first stated with clarity within Kant's philosophical lineage by our arch nemesis Aristotle. (See The Philosophy of Success elsewhere on this blog). It's Aristotle with whom the professor should have picked his bone, not Kant. Kant's too far gone. He's too far down the line.
Read more »
at February 16, 2010 18 comments: